Just a few nights ago, I was in a particularly fatalistic state of mind. A lot of times, I think in the moments before going to sleep. Sometimes I listen to music (with ear buds), and that was the case that night. Pandora was playing in my ear. I was feeling very melancholic and afraid. Mostly afraid of the ultimate complication: ceasing to live. In other words, my thoughts were swimming in uncertainty. I then had the feeling that this was inevitable. It had to happen. It was never a question of whether to have surgery or not, but rather to have one soon or later. And choosing later only increases the odds of more complications. Then this song came on, and depressed the crap out of me. But that’s only because it seemed to strike the very core of what I was feeling. And it helped me process, because when I heard it… the waterworks began. I appreciate songs that bring the deep to the surface. It’s not a happy song, but still a beauty I think. And one that captures the feeling of doubt overcoming hope.

How It Ends by DeVotchKa

Hold your grandmother’s Bible to your breast.
Gonna put it to the test.
You wanted it to be blessed.
And in your heart,
You know it to be true,
You know what you gotta do.
They all depend on you.
And you already know.
Yeah, you already know how this will end.

There is no escape,
From the slave-catchers’ songs.
For all of the loved ones gone.
Forever’s not so long.
And in your soul,
They poked a million holes.
But you never let ’em show.
C’mon it’s time to go.

And
You
Already know.
Yeah, you already know
How this will end.

Now you’ve seen his face.
And you know that there’s a place,
In the sun,
For all that you’ve done,
For you and your children.
No longer shall you need.
You always wanted to believe,
Just ask and you’ll receive,
Beyond your wildest dreams.

And
You
Already know.
Yeah, you already know
How this will end.

Yesterday, my sister’s dear friend passed away. His name was Jay, and he was a cancer WARRIOR. I was not very close to him, but felt connected to him through my sister, and – even more so – through the strength and goodwill he showed as a survivor.

I miss him, as I know many others do as well. My heart is also with Jay’s wife, Robin, who has demonstrated an amazing spirit and support for her Captain.

Love to you BOTH, Robin and Jay.

My brother and I were having a chat yesterday. He told me he heard a song while on the road and it made him choke up, thinking of me.

It was “My Body” by Young The Giant. Curious, I hunted down a copy of the song, and instantly realized why it had affected him. It affected me also, right then, as I heard it for the first time. I felt an interesting reaction: a combination of “hell yeah!” and a lump in my throat.

My brother found me a new anthem.

It’s the emotional mirror of the song, “Cold Desert.” While the former song expresses pain and sorrow, this one expresses defiance and hope. If you are feeling down and out and need a pick-me-up, just sing along to this, and see if it doesn’t help recharge the fire inside you:

My Body by Young The Giant

Stop! the train is riding
Down to the station
Where you lived
When we were school kids

Hey! the rails are caught now
And I am falling down
Fools in a spiral
Round this town of steel

Stop! the train is riding
Down to the station
Where I lived
When I was a cool kid

Hey! is it my fault that
The fallen embers burn
Down in a spiral
Round your crown of thieves

It rides out of town

It rides out of town

On the morning of our 3rd day, the kids woke up and went swimming at the hotel pool. I appreciated the extra moments of silence and slept a little longer. When they came back and dried up, we went to have a meal at a local Chinese buffet.

Normally, buffets are not my cup of tea. It’s not because of the food, necessarily, but because I feel I can’t take advantage of the whole “All-You-Can-Eat” thing. I generally don’t have big meals. I’m a buffet owner’s dream client, since I usually eat way less, and they don’t let you take a doggy bag for whatever you don’t eat at the time. What works for me is to eat smaller amounts. This means I’m the king of reheating leftovers. BUT – this morning at that buffet wasn’t bad. I had a little soup (with a warm, soothing broth), some chicken, orange wedges, and plenty of jello. Plus, I picked off a couple things here and there from my wife and daughter’s plates. In other words, I don’t feel as though I wasted money eating there.

Then it was off to Disneyland again. I admit, I was tired, but this was an opportunity to experience more pockets of joy. So I went.

I asked the group (or maybe it was their suggestion, I forget) to go on rides that I missed from the first day when I left early. We went on Pirates Of The Caribbean and I was impressed with how well done the animatronic Jack Sparrow is. It really looks like Johnny Depp.

We also saw the Haunted Mansion ride. Last time I saw that ride it was decked out with Jack Skellington and the Nightmare Before Christmas crew, so I liked that I could see the ride as it was originally intended. It’s a little creepier, which is a good thing.

In case you don’t know, having a wheelchair gives you special access to many rides/attractions in Disneyland. The place was built before the Americans With Disabilities Act, so originally, none of the lines were built to accommodate wheelchairs. Many rides have either stairs or tight aisles if you go through the standard, walking queues. In order to allow wheelchair folks (and FATTIES ON SCOOTERS WHO CAN USE A GOOD WALK INSTEAD– yeah, I said it…) access to the rides, they have alternate entrances/lines for them. Usually, the way into the ride is through the exit, or a side entrance with elevator access, or a combo of both.

We headed to Space Mountain, and waited near the exit area (wheelchair entrance), while some of us took a bathroom break. My wife and I both noticed a guy with a big, gold chain walk by, and we did a double-take.

It was apparently, Taboo, the guy from Black Eyes Peas that walked passed us. He was going the wheelchair shortcut way also. This guy (the one with the straight long hair): 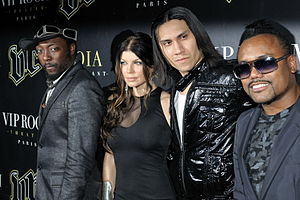 No, he wasn’t in a wheelchair, but I can get why someone famous wouldn’t go through the regular lines. He went ahead of us and once our group was together again, we kept going through the wheelchair entrance. As part of the wheelchair experience, what the Disney attendants did is pull a coaster car off the main track and to the side, where we then stepped into it. I “parked” my chair on the side and got on board.

Once we were all in the Space Mountain car, we waited a bit for another car to go ahead of us (after that, our car rolled back onto the main track and followed the other car). I turned to see the passengers on the car that  pulled up next to us and what do you know? It had that same Black Eyed Peas dude on it, and in the row in front of him was Kobe Bryant, with his daughter.

Not that I care about either of them, but hey, it happened.

Later that night, in California Adventure, we went to an area that was lit up with black lights and blasting loud, kid-friendly, dance music over a pretty sweet sound system. In the daytime it looks all fluorescent with neon paint and banners. At night, all that neon glows under black lights. The hilarious thing is that there were a bunch of kids totally into it. Literally just dancing in the street. A kiddie rave. Some of them even had glow sticks! It didn’t take my daughter but 2 seconds to join the dance party. What I loved most is how she danced. It was plain fun, silly, goofy, and thank GOD – innocent. She went to a section that had a video wall where she could see a psychedelic version of her own body (and the kids around her). I literally just smiled looking at her have fun. I got so lost enjoying her fun, that I didn’t get any of it recorded. No worries, though. It was definitely the highlight of the night. So much so that it will be forever etched in my memory bank. This song, which Lexi LOVED, isn’t my kind of music, but I like it now for the memory it brings back:

That moment – her having fun dancing and being carefree – gave me ammunition. To put it in perspective, she gave me a nuclear arsenal. I was as happy as I was proud. And now, I know what it REALLY was. Appreciation. No child should have to suffer. Kids should be kids for as long as possible. I am grateful for her health, her goofiness, her smile, her self.

So, good day. Tough day also, with the difficulty in being able to medicate (cameras everywhere, I’m telling you, EVERYWHERE – ugh!). But I’ve got more ammo, baby!