I had a nice weekend. It was my wife’s birthday and also marked our 8-year “let’s be boyfriend/girlfriend” anniversary. To celebrate, we spent Friday, Saturday, and Sunday in my hometown, San Francisco.

We stayed in a nice hotel just outside the city and paid way less than it was worth (thanks, Priceline). Friday night we drove down and saw the Giants/Mets game at ATT Park. I’d been there before for concerts, but this was my first Giants game there. It was pretty cold, but I had a pretty good hot dog (and after that, a way stale churro). Long walk from the car to the seats, but I made it. After the game, there was a free fireworks show. Nice.

Saturday, we went to Pier 39 and ate at the Franciscan, one of many waterfront restaurants. I had a cup of tasty clam chowder and grilled shrimp on a skillet. The shrimp LOOKED great, but lost points since the cooks didn’t peel them. Next, we walked a little bit around the shops and decided to go on a mini-cruise. We went on a Blue and Gold Fleet boat and went under the Golden Gate Bridge and around Alcatraz. Pretty cool to see the Golden Gate from directly underneath. The boat tour lasted an hour. Good times.

Next, we met up with my friend, Luis, who works in downtown SF (just a few minutes from the pier). He gave us a tour of his workplace, the Olympic Club. It’s a totally ritzy, swank, rich boys and girls club. Really interesting. Huge indoor, heated pools. Full size basketball courts (yeah, more than one). Handball courts and high-tech gyms. Outdoor, city-view patios. Marble statues, bar and lounge. While we were there, an old guy with his buddies came out of a room in mid-laughter saying, “Hahaha, don’t you love money?” Who wouldn’t, buddy!?

Later, we went to check out Twin Peaks. It was dark by that time and we should have known better. As the car winded up the hill, it got attacked by fog. A BUNCH of fog. Of course, when we got to the top, we could see NOTHING. That’s SF, though.

Next we had dinner at a crepe place in the Castro district. Awesome dessert. We shared a crepe filled with blueberries, strawberries, bananas, and nutella spread. It had whipped cream and vanilla ice cream on the side. That was after I had a half of my chicken club sandwich. That crepe, though…mmm, mmm good.

On Sunday, we went to the Mission District and checked out my old apartment on 25th and Folsom, then went around the block and checked out some murals. We walked around a little and stopped for a bite to eat at a random taqueria. I ordered 3 tacos (carnitas, asada, and al pastor) and ate 2 and a half. Not bad, not bad.

After the tacos, I was in full Mexi-mode. That meant I had to buy some pan dulce. We walked to a nearby panaderia (bakery) and I picked up two bags full of sweet bread, which I will devour over the week. Next we walked a little more, checking out more murals and seeing more of La Michon.

I must say, even though it still looks dilapidated and worn down, the Mission is a lot nicer than I remember as a kid. Way less thugs and way more families, tourists, and normal folks. Cool beans.

We also checked out the hills/avenues to see San Francisco’s decked out homes. Always fun to look at the mansions. Look at this beauty: 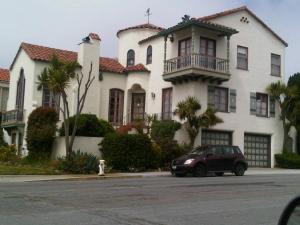 Later, we went to watch Inception at the Metreon downtown. Really cool movie. I’m still thinking about it. Thumbs up. I ate a little less than half a large bucket of popcorn and a drink.

Hm, what else? Before we left the city, we drove by the last place my family and I lived in before moving to Sacramento. Unfortunately, I was too full from the popcorn to eat at Ling Ling, one of my favorite Chinese food joints in San Fran. Oh well, maybe next time.

On the drive home, we stopped to get a fast food bite (by then I was hungry again). We split a Nation’s burger (they’re pretty big) and some fries.

You might have noticed (or not) that I didn’t have the Benecalorie shakes over the weekend, which is true. But, I do feel as though I ate well. There was a slight hiccup Sunday morning when I woke up pretty nauseous and got very close to vomiting, but luckily I medicated in time and was able to calm the flareup.

Thanks for your replies on my weight scale question. I’ll monitor myself weekly and keep you informed. This morning (Monday) I got on the scale and it said 82.0 lbs. Last week, I was 80. This could be something, could be nothing. If next week holds at 82 or increases, I will know for sure that I’m on an incline.

Side note: I ordered the Iron Gym last week (thanks, woot for the cheapo price). I’m excited about it. It’s a piece of equipment that can be hung over a doorway (without screws) to allow you to do pull ups, chin ups, and crunches. I can’t do crunches the normal way (on my back, knees up, small bends at the waist) because of my kyphosis. But the Iron Gym will come with elbow straps, which will allow me to hang by my elbows/arms. Then, to do crunches, I would just raise my legs using my ab muscles (no waist bending necessary). This gives me great hope for strengthening not only my ab muscles, but my shoulders/midback and pecs. All of these muscles, if strengthened daily, should help counteract the tension brought on by the shape of my spine.